In his most recent podcast, Lobdell shares “The Ferry Godfather: The Legend of Joe Beek and the Balboa Island Ferry.”

Here’s a preview of his latest episode, which began as just a fun look at the Balboa Island Ferry. According to Lobdell, “I thought I’d throw in a little background on Joe Beek, the ferry’s first legit operator who ran it for a half century before his son, Seymour, took over. I mostly knew that Joe Beek was known as the Father of Balboa Island and the beloved operator of the ferry.

“But then I began researching Joe Beek (born in 1880), and I stumbled upon one great story after another. Here’s a sampling (and it’s only a sampling).

“When he was all of 13, Joe became the primary breadwinner for his family. Because of that, he started high school at 27. In 1907, he fell in love with Balboa Island long before almost anyone else. He fibbed in order to get a job with the developer of Balboa Island.

“There’s more: He was Newport’s first harbormaster, served on the city library’s first Board of Trustees and forged his birth certificate to join the military in 1941 after the bombing of Pearl Harbor. At age 61! Oh, and he served a record 49 years as secretary of the California Senate.

“Let me give you one more detail that I love. To deepen the water depth at the ferry landings, Joe would wade out into Newport Harbor at low tide, drag a steel tub along the bay bottom and his wife Carol (using a pulley and winch) would reel it to shore. Okay, last detail. He built the ferries himself. He was the ultimate DIYer.”

Sidenote: “I really believe the city should commission a life-sized bronze statue of Joe Beek and place it at the ferry landing on Balboa Island. It would be a fitting tribute to Joe and an excellent reminder of the impact one person can have on
the city.”

All these stories about Joe Beek and a whole lot more can be found in “The Ferry Godfather” episode now available at www.newportbeach-podcast.com, or on Apple Podcasts and Spotify, where you can subscribe and not miss an episode. 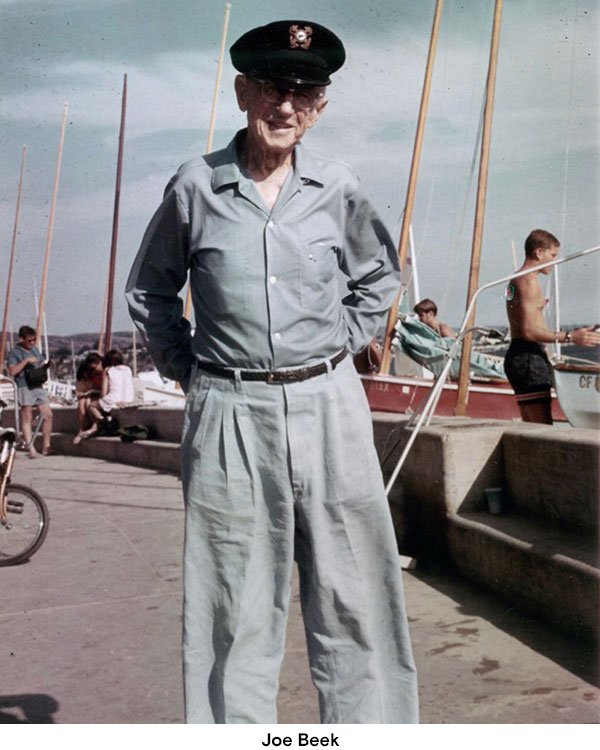